Nerdhood? Nerdom? What DO you call it?

Exciting, I know! You can hear about all my crazy adventures and daring escapes from death! I'm like a regular Sherlock Holmes, out saving the world and all that jazz!

Just kidding. And yes, I really did just use the phrase "all that jazz." What of it?


Specifically, I am going to write about the phrase "you are such a nerd." To illustrate my point, I will be using personal (and hopefully, not too boring) anecdotes. I therefore present:

A Case Study, or, How Olivia Became A Nerd

I was that girl growing up who carried books everywhere. My parents actually had to remind me on Sunday that no, I could not bring my book to church. It didn't matter if my current reading selection had characters in mortal peril - my parents simply said, "Olivia, they aren't people, so no." They just didn't understand. They didn't understand my agony in leaving my book - a.k.a. "inky friend" - behind me. I was really the only reader in my family growing up, so no one else really understood my obsession with books (and if you don't, that's a blog post for another day). As I've gotten older I've grown out of this habit of taking books to church, of course.

Moving on. As a teen, I faithfully attended midnight openings of the Harry Potter films. As a college student, I argued with my friends about which Avenger is the best (Ironman, obviously. Don't believe me? We can debate that in the comments). If any of my friends felt the need to have a 6 hour long Lord of the Rings marathon, nothing could stop us. Nothing, except maybe some form of apocalypse - in which case, we were prepared to arm ourselves like Legolas or Aragorn.

If my friends and I feel the need to go to the comic book store after the viewing of a Marvel movie, we go. (Note to self: showing up in a comic store wearing a skirt is a sure-fire way to get stared at. A lot. Talk about awkward). If I want to watch "Man of Steel" 3 times in a row during a grading time crunch, I will.

I don't remember when exactly I realized I was a nerd. Perhaps it was my incessant rambling to my sophomore year roommate about the intrigue and suspense in Shakespeare's Othello and how it was an unappreciated work of literature. Perhaps it was the reading of scholarly journals and magazines like Sky & Telescope, National Geographic, and Scientific American (amongst others) at Barnes & Noble. On that note, dear gentleman customer in the magazine section: I don't judge your reading of Martha Stewart Living, so please don't try to direct me to the "girly" magazines. The only time I read Glamour magazine is when I'm getting my hair cut at the salon. I'll stick to psychology magazines. Thanks.

Whatever the reason, I recall the first time when someone once said, "Wow Olivia, you are such a nerd." OH, THE HORROR! Or not. I don't recall who said it, nor do I care I was called a nerd. Why must it be a negative term or labeling? I'd rather be a nerd than say, a drunk, or a jerk, or whatever. I think Zachary Levi puts it nicely: 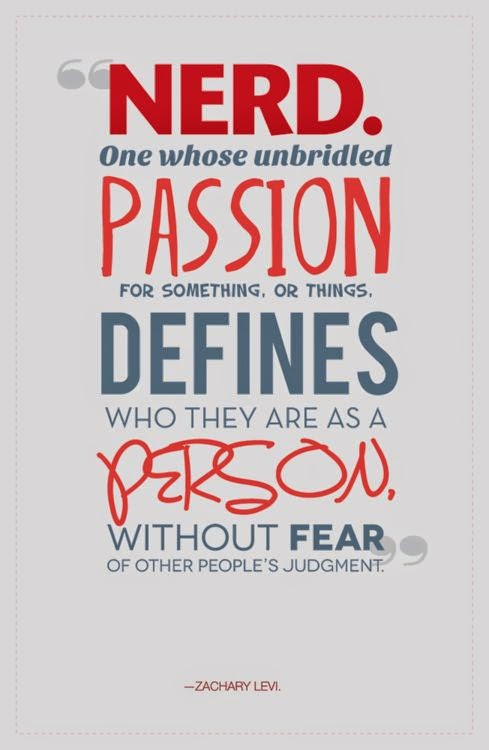 HECK YES. "Unbridled passion." See that, my friends? I was now unstoppable! There are tons of things I'm passionate about. Learning. Teaching kids. Books. Writing. Blogging. Reading. Promoting tolerance. Comics. Art. Music. Piano. Soccer. Theatre. The outdoors. Those are just to name a few, but I have so many more. I shall continue to be a nerd, for the rest of my life, and that's totally fine with me.

This case study is TO BE CONTINUED...

What's wrong with being passionate? Without passion, nothing is accomplished. Change wouldn't occur if people didn't care enough about something to actually make it happen. That's all being a nerd is about: being passionate about things "without fear of other people's judgment." Yes, I will talk a lot about something I care about. But in response, I will also listen intently to other people when they talk about what they care about. It's good to care about things, about people, about interests. It shows you are human. So the next time someone calls you a nerd...

Tell them that's fine with you.

With love from one nerd to another,

Posted by Olivia Edwardson at 8:07 PM

Email ThisBlogThis!Share to TwitterShare to FacebookShare to Pinterest
Labels: Be Yourself, Me, Storytelling