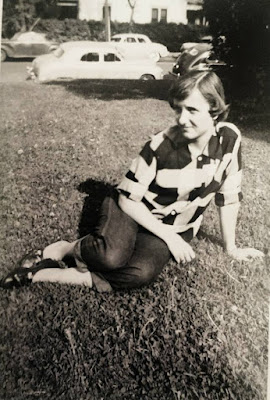 It's hard for me to believe it is already November and that it has been two weeks since my last post. My apologies, faithful readers. I had a full-blown cold upon returning from Montana (I even stayed home from work one day, which I rarely do).

Then to add to this, my theatre season began - and for anyone who has been in showbiz, you know how busy it gets. But while this may explain my lack of writing, it certainly doesn't excuse it! I am going to try to do another post mid-week to make up for the weekly entry I missed.

Today's focus is the conclusion of M's sophomore year (April/May 1952). Her letters these two months are less newsy, fixating more on her spring fever and the soon arrival of summer (which meant her opportunity to return home!). I think we can all relate to that, especially those of us who have had the opportunity to live in the country and great outdoors. 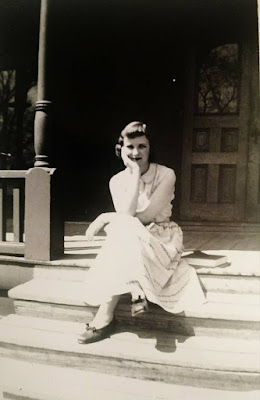 I've also included two photographs of Marilyn in this post. Both are not dated, but based on her appearance our family believes these to be college years photographs. I have very few photos of M during college, so there won't be many more ahead. I hope you enjoy today's entries.

April 3, 1952 regarding her correspondence with her cousin's friend in Korea: I heard from his buddy and he said they expect to be rotated from Korea any day now. They had been back at the front for a month and were pretty anxious to be relieved.

[from the same letter as above entry] Last night I sat and studied again. It's the first I've done since last week when we had mid-semesters. It really feels good to be a little ahead of yourself for a change and not always behind.

April 21, 1952: We had our last recording session yesterday, so that's all over with now. The records should be out sometime before the school term is up. [I marked this in my research notes because I'd like to see if Augsburg has archives of these choir recordings.]

April 24, 1952: The weather is just gorgeous again. We've had April showers but today the sun is shining. Everything is getting so green it makes me just feel good to look at it. [and again on April 27:] It's so hard to sit still in classes when its so nice. Last year was so rainy and different. [I love how M found joy in simple things, which is why I included this about the weather.]

May 5, 1952 regarding the first performance of the operetta, in which Marilyn was the lead role: The operetta last night went beautifully. I sure hope it is the same tonight. You know I can't ever remember when I've been so at ease in anything. I was a little nervous all day but I'd rather it was like that than to be nervous for the actual performances. The crowd was big and responsive. I think they were all overwhelmed! Oh, I wish you could have seen it!

May 8, 1952 regarding the closing of the operetta: The comments on the operetta have really been good. I even miss the practice. It was fun and now that it's all over I'm really glad I was in it. Next Saturday all the cast are invited to J's cottage at Big Lake for the day. It's about forty miles from the city. I hear that we cleared nearly $400 on the performances. Howie [her scene partner] was so much fun to work with and he sings beautifully. We had to take a curtain call together. We held hands and bowed. They also took more pictures but I haven't seen them yet.

May 23, 1952: We've had several good rain showers lately and it's been cool so everything looks just gorgeous. The lilacs are blooming, the peonies have just started, and the Rose of China trees are in full bloom. [I included this because of the pretty picture she paints, and lilacs are my favorite.]

May 25, 1952 [Her last letter for the school year before returning home for the summer. This letter was addressed only to her mother]: I feel the need to confide in my favorite mom. I'll be so glad when I can talk to you again. I sometimes wonder if we couldn't sit on an island all alone and I'd still never run out of things to talk to you about.

As I finished this year's worth of letters, it dawned on me that I don't have many more left to read. I have her junior year and the eight she wrote in September of 1953 before her sudden death. Reading, preserving, and researching Marilyn's letters has taken so much of my time these past 6 months, it is going to be hard when I have no more of her letters to read. But, that is when the full novel focus begins and a new chapter in this writing project.

Thanks for sticking with me and Marilyn. As she writes: love always.
Posted by Olivia Edwardson at 9:52 PM

Email ThisBlogThis!Share to TwitterShare to FacebookShare to Pinterest
Labels: Letters from Marilyn, Novel