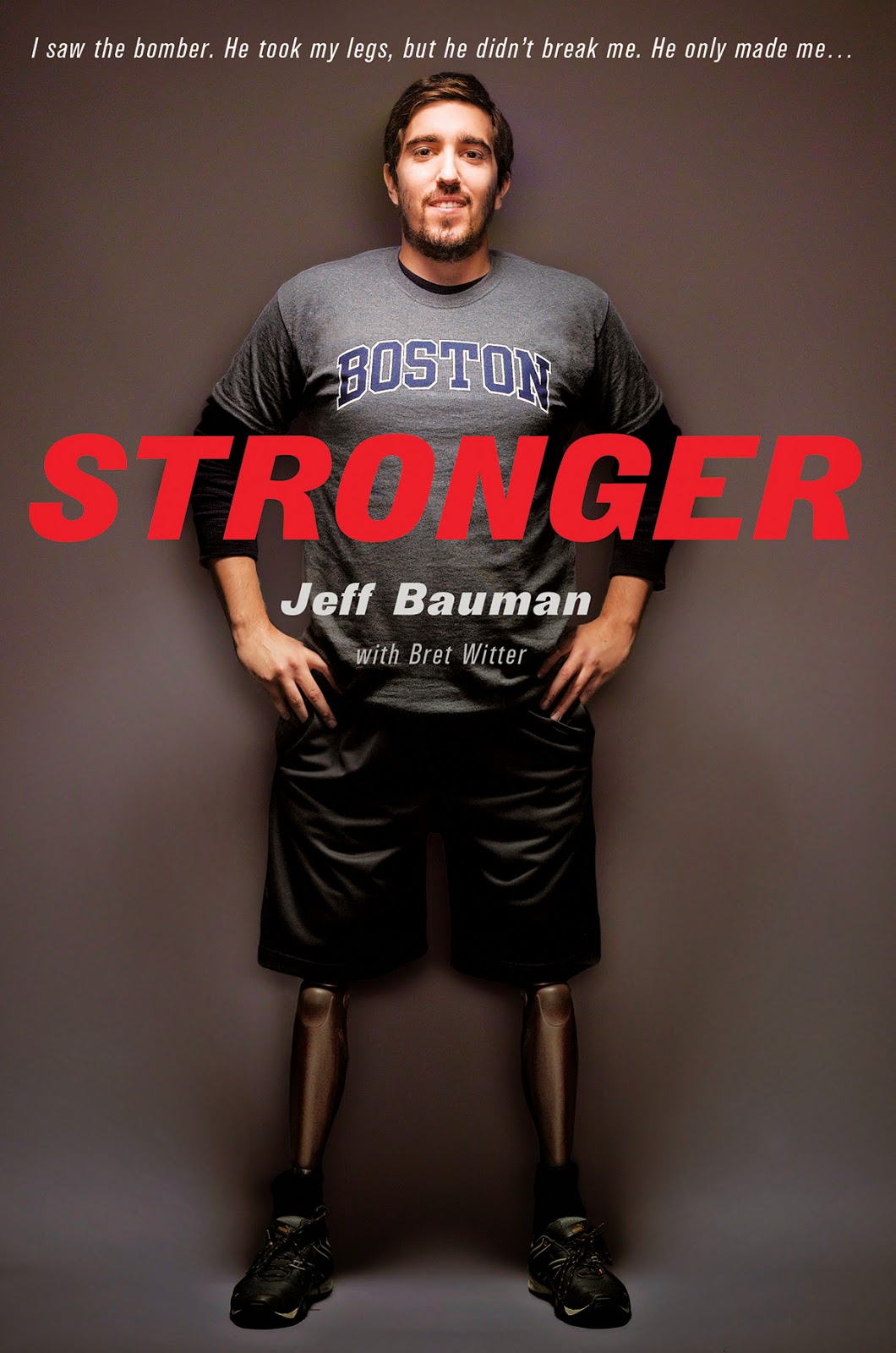 "I saw the bomber. He took my legs, but he didn't break me. He only made me stronger." -Jeff Bauman

It is time for another book review. I know it has been a while, but it hasn't been for lack of reading. I have been reading a lot lately - Lauren Oliver's Before I Fall, I Am Malala by Malala Yousafzai, a reread of Gayle Forman's If I Stay (in preparation for the movie, of course), On the Road by Jack Kerouac, and countless others.

I chose Stronger by Jeff Bauman as my title for review. I am currently in an autobiography and biography phase, so I'm reading a lot of nonfiction lately. Bauman's memoir is powerful. Incredibly powerful. His writing is open, honest, and raw with emotion.

For those of you unfamiliar with his story, Jeff Bauman was present at the bombing of the Boston Marathon on April 15, 2013. Bauman had attended to cheer on his girlfriend, Erin, near the finish line. He was standing right by the bomb when it went off, resulting in the horrific loss of both of his legs. He writes about facing death, about his rescue, and ultimately, the peace he worked towards during his ongoing and continual rehabilitation.


It is hard to imagine a life without four joints, as Jeff lost both of his legs above the knee. The precise process in which he had to learn to use first a wheelchair during his initial recovery from surgery and then with prosthetic, bionic legs, is astonishing. He writes about the effort it took to take a mere four steps on his first day with the artificial legs. He describes his frustration about managing staircases. He explains the stress on his friends, his family, his girlfriend, and those who stood by him.

Bauman writes fluidly in a way that captures the attention of the reader. I finished this book in two days. I could not put it down. His passages on receiving nationwide support from strangers who heard his story are inspiring. The brutal truths he shares are eye-opening to this tragedy that occurred a year ago. He played a pivotal role in identifying the individuals who organized the attack, resulting in more media exposure for his family when they were trying to stay strong in a difficult time.

Jeff Bauman has his own website that I encourage you to check out when you get a chance. To conclude, I will share this passage with you:


I noticed his backpack. It was sitting on the ground, near my feet. I felt a jolt of fear, and that old airport warning started running through my head: Don't leave bags unattended. Report suspicious packages. I looked around, hoping to find the guy -

And then I heard it. The explosion. Not like a bomb in a movie, not a big bang, but three pops, one after another.

It doesn't get hazy after that. It gets very clear. The hospital psychiatrist later told me that my brain "lit up," that at the moment the bomb went off my brain became hyperalert, so that even though my memories are fragmented into hundreds of pieces, all the pieces were clear.

Take some time to read this memoir. I know you will find it inspiring.
Posted by Olivia Edwardson at 11:51 AM