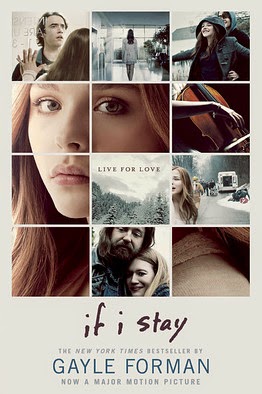 I try not to jump on the bandwagon of books turned movies, but today I am going to make an exception for Gayle Forman's If I Stay. I recently reread the novel in preparation for the movie, but I first read this book long before movie rights were negotiated. It was published in 2009 and the movie has come out now, five years later (I included the movie edition cover of the book, just so that more people would recognize it - the original cover is just as beautiful).

What initially captured my attention about this book is the strong emphasis on music. Music has been a part of my life since I was a little girl (I took piano lessons starting at age 7, but that's a post for another day), much like Mia's connection with her cello in If I Stay. Secondly, Gayle Forman writes with strong imagery. I have read a lot of books over the years, and she is one of few that can really paint a colorful picture of what is happening in my imagination.

Now, about the novel. Mia is born into a musical family. Her dad was in his own band, but left it to be with his family. Mia has one younger brother, Teddy, whom she adores. The story, however, pivots around her relationship with Adam, a suave rocker she meets in high school. Mia considers herself to be the misfit of the family, the only one interested in classical music and her own love of the cello. It is surprising to her when Adam captures her attention, but their relationship grows in a unique way.

One day, a fatal car accident changes everything and Mia is left in a coma after sustaining many injuries. Her whole family is involved in the accident (and I won't tell you what happens because I don't want to give too many spoilers). What makes this novel unique is that Mia's spirit becomes separate from her comatose body - she can see and hear what is happening around her as her body lies in the ICU of the Seattle hospital to which she is transferred. This is what makes Forman's writing style incredible - she has a way of making the reader feel Mia's pain and the pain of those who wonder if her body will ever awaken. Adam, her grandparents, her friends, and other close people in her life all feel differently about Mia's fate. Ultimately, Mia is left with a difficult decision: if she should stay and keep on living, or if she should die.

To give you a glimpse of how Forman uses imagery, I will share this passage with you. It stood out to me in the book as beautifully and sorrowfully written:

You wouldn't expect the radio to work afterwards. But it does.

The car is eviscerated. The impact of a four-ton pickup truck going sixty miles an hour plowing straight into the passenger side had the force of an atom bomb. It tore off the doors, sent the front-side passenger seat through the driver's-side window. It flipped the chassis, bouncing it across the road and ripped the engine apart as if it were no stronger than a spiderweb. It tossed wheels and hubcaps deep into the forest. It ignited bits of gas tank, so that now tiny flames lap at the wet road.

And there was so much noise. A symphony of grinding, a chorus of popping, an aria of exploding, and finally, the sad clapping of hard metal cutting into soft trees. Then it went quiet, except for this: Beethoven's Cello Sonata no. 3, still playing. The car radio somehow still is attached to a battery and so Beethoven is broadcasting into the once-again tranquil February morning.

Talk about some powerful writing. The appeal to our sense of hearing in this passage is so strong, you can almost feel that you are there.

If you have already seen the movie, read the book too - I guarantee you will love it more. The movie did an incredible job with the script and being the nerd that I am, I could actually pick out passages from the book that were word for word. The sorrow is evident in the movie as well, something that is often downplayed in films. I encourage you to read both the book and see the movie. Fair warning: if you are the emotional type, you will want a box of tissues for both.
Posted by Olivia Edwardson at 8:34 PM

Email ThisBlogThis!Share to TwitterShare to FacebookShare to Pinterest
Labels: Books