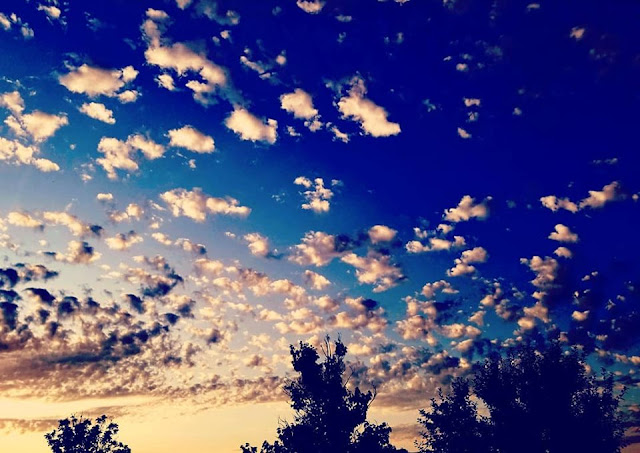 I adore this time of year, with the cooler temps and hint of autumn on the way. I love my weekend mornings. The lounging around leisurely in my pajamas, sipping my tea, and having uninterrupted hours to nerd-read manuals and science books. Current selection: The Man Who Caught the Storm: the Life of Legendary Tornado Chaser Tim Samaras by Brantley Hargrove (I am finding it a riveting nonfiction read!). The light sweater dresses and slip-on shoes - easy fashion for my "always on the move" lifestyle. The crisp air, starry nights, and country drives.

I had intended to write this summer, but it went by so fast! It's hard to believe school has already started. Of the 30 days in June, I spend 19 of them on the road. Those days were filled with driving, many states, music jam sessions, coffee, new people, good friends, and lots of exploration.
July was spent on the home-front, where I was at the theatre full-time directing Godspell Jr. (and that went into August!). Before I knew it, the whirlwind of "back-to-school" had started, and now here we are, already halfway into September.

It had been a good summer, readers. And while going back to school is always bittersweet, I am hopeful this year will be a good one.

Shifting gears and moving forward, let's talk about Marilyn. Now having had some time to dabble in various chapters of each of her academic years, I've "gone back to the drawing board," so to speak. I am focusing on organization now, using note cards to storyboard the progression of the plot. The note cards are in a constant shuffle as I play with the overarching theme. Some chapters that I've already written fall into these plot points and some do not. The manuscript draft is getting a lot of rewrites as a result, so today's post is an update without chapters.

My September goal is two updates this month, so I promise that the next Certainly Candid post here will have documentation of the storyboard, a Marilyn letter for you to see, and a new novel excerpt.

Email ThisBlogThis!Share to TwitterShare to FacebookShare to Pinterest
Labels: Letters from Marilyn, Novel